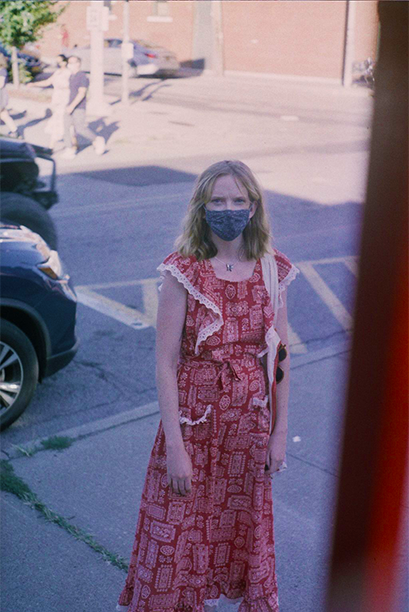 I recently took a family trip to upstate New York to eat, hike, and antique (unlike “summer”, I am completely at ease using “antique” as a verb). While I found the latter two in Beacon and Hudson, I was dismayed to discover that upon drop-off at my film processor de rigeur, 36 exposures that I’d taken during my trip had come back blank. “I dislike bearing bad news, but one of your two rolls is blank,” Nick from PhotoLounge emailed me. “At a glance, the blank roll in question looks unexposed.”

Disappointed, I began to contemplate the contents of this particular unexposed film roll, lamenting the loss of roadside flowers encapsulated at the West Taghkanic Diner, lavender lit waterfalls at The Roundhouse, pink-foil wrapped chocolates from Verdigris, arte povera installation shots from Magazzino, and a plethora of multiple exposures taken while hiking. Shooting film has taught me both the virtue of patience and the importance of delaying gratification, so I was naturally disheartened to discover that the fruits of my labor had been for naught.

I then thought to compare my quarantine experience to the undeveloped/unexposed film roll for the purpose of this blogpost. Sure, I shot all of the right shots, pursued a more practical and less theoretical lifestyle,* got a new job in New York City and an apartment in Hoboken, but despite accomplishing these unarguably positive lifestyle changes, I continued to feel like the fat X at the beginning of Teddy Roosevelt’s February 14, 1884 diary entry wherein he wrote “The light has gone out of my life.”**

Save for the initial two weeks of snow day-like splendor, I became truly loathe to the word quarantine, which sounded only slightly better in Italian over Zoom, la quarantina, as though it was something far more romantic than it really was.*** While in Philadelphia, the red phase of quarantine entitled me only to solitary walks along the industrial landscape of West River Drive, Friday salad deliveries from HipCityVeg, and Saturday trips to the supermarket. Like waiting to receive the notification that your film has been developed or anticipating Santa’s visit on Christmas Eve, Friday nights brought about an almost fiendish excitement for those Saturday morning excursions (I’d plan my makeup and outfit accordingly).

As quarantine wore on, I underwent several metamorphoses, abandoning my faith in moon phases, crystal healing, kundalini (here’s to White Bird in a Golden Cage), and even meditation. None of these yin activities seemed to be making an impact on my wellbeing. The lows were low and the highs were even lower as they often lulled me into the false suggestion of a more permanent, positive mental state. Who was it that paraphrased Nietzche when writing that “Hope is the cruelest emotion of them all?” Regardless, I had scribbled those words across almost every page of my journal, at the point when I still believed in journaling and catharsis in general.

And even as restaurants and shops began to open, with the easing of restrictions came the flourishing of FOMO. I captured all of the aforementioned proverbial experiences (learning golf, going to church, reading historical non-fiction) and yet continued feeling undeveloped. Once I moved to Hoboken, my meanderings down Washington Avenue, where the outdoor bars are packed with drunken sports fanatics and their identikit girlfriends, began to exhaust me and instill within me an overwhelming loneliness. So even in spite of my ameliorated lifestyle, I still felt like Teddy Roosevelt’s big fat X.

As I continue to navigate the rules of a more flexible quarantine, dancing between “to go out” and “to not go out,” I return to pondering the undeveloped Kodak 400 from my upstate weekend. Sure, I shot the photos, I matured in the right ways, but still I remain unable to appreciate the tangible results–which begs the question, is it worth it to shoot film at all?

*J had once told me that I lived in a “far too academic and hypothetical world.”

**For the record, I am indeed being melodramatic, as Roosevelt wrote this entry after losing both his mother and wife.

***Although there is a certain loveliness in taking quarantine seriously, as did the Italians, thanks in large part to Angelo Borrelli and Roberto Speranza (whose cognome literally means hope).